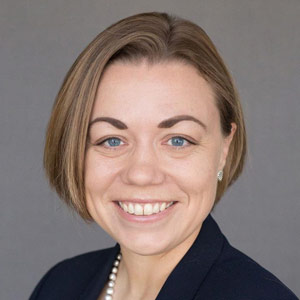 Cathedral District Board of Directors

Originally from Barrington, IL, Elyse grew up in a family that was half Catholic and half non-denominational. While studying theology at Wheaton College, she split the difference and became an Episcopalian, having been drawn to the historical rootedness, the liturgical thoughtfulness, and the social openness of the Anglican tradition.

From 2007-2010, Elyse attended Duke University Divinity School where she earned an MDiv in Anglican Studies. From 2010-2012, she served on the parish staff of St. Peter’s Episcopal in Arlington, VA. She was ordained a deacon at that parish in 2012 and ordained a priest at the Chapel of the Cross in Chapel Hill, NC in 2013. From 2013-2017, Elyse served on active duty as a chaplain in the US Army.

Elyse moved to Jacksonville in 2017, shifted gears professionally, and began work at a large financial services firm. She serves on the board of JASMYN, a local non-profit supporting LGBTQ+ youth, and as an assisting priest at the Episcopal Church of the Good Shepherd in Riverside. She will complete an MBA in finance from Johns Hopkins University in December 2021.